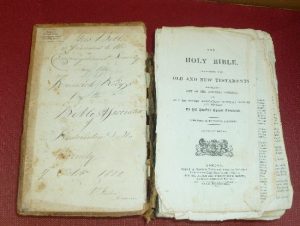 The Keswick Ridge United Church can trace its roots back to the descendants of the Mayflower Pilgrims and early Puritans, many of them Loyalists, who originated from Massachusetts and neighbouring colonies during the years 1762 -1784. These early people established settlements along the Saint John River at the present-day communities called Sheffield and Maugerville, New Brunswick. In 1763 they established a Congregational Church in Sheffield. About 1802, some families of these early settlers decided to relocate about thirty kilometers from Sheffield and Maugerville, upstream along the Saint John River, to a higher elevation and where land was fertile: the Keswick Ridge area. They established a “Congregational Society of Keswick Ridge”, which conducted worship services and prayed to the glory of God in the homes of the society members for almost a quarter of a century. A bible was presented to the Congregational Society of Keswick Ridge on October 17, 1822 by the Bible Association of Fredericton, New Brunswick. On August 26, 1826, The Rev. Archibald McCallum presented Articles of Faith and a Covenant from the parent Congregational Church (in Sheffield, NB) to the faithful on Keswick Ridge. Thus was the Keswick Ridge Congregational Church established in 1826. This congregation was the second established Congregational Church within the province of New Brunswick (N.B.), second only to that in Sheffield. Immediately, the settlers in Keswick Ridge went to work planning a building for worship services and to support community activities. It was built on donated land from one of the early families and was located directly across the road (i.e. N.B. Route 616) from the present day church building.

The congregation at Keswick Ridge continued to grow over the fifty years following its establishment in 1826. It was active within the region. In 1875-1876, the congregation built a 300-seat facility to accommodate the growing number of local worshipers and to host meetings of the Union Congregational Churches.

The new place of worship was built by Mr. Henry Estey, across the road (N.B. Route 616), and is situated at the present-day location of the church building. A new parsonage was also built in 1876 on the property next to the new, church building. The new (and present-day) church building features a white building with a tall, white spire that dominates the head of the Ridge and may be seen for miles around. The new church building was dedicated on January 28, 1877 by The Rev. Joseph Barker of Sheffield. A picture of the new, magnificent building (c. 1900’s) can be seen in Ref. 1 of Section 3 of this Application; adjacent is a picture showing the present-day church.

We would like to highlight that this site, The Keswick Ridge United Church, hosted a significant and meaningful event in September 2016 on the ridge: One hundred and ninety (190) years of continuous worship to God and service to our Lord and Saviour, Jesus Christ. Under the leadership of the Sunday School Superintendent, Mrs. Susan Fearon, the children and youth of the Sunday School together with other members of the congregation presented a well received, historical enactment of the life and development of the Church on Keswick Ridge. A special Service of Worship was celebrated and led by The Rev. A. David Luker. The church sanctuary was filled to capacity with many from the community attending. A special outreach ministry was also established to commemorate 190 years in ministry and service of the Church to the community.

The complete, detailed, 36-page Nomination document may be obtained upon request from the Office of the General Archivist of the United Church of Canada.